Includes documents referring to the indigenous peoples of Manitoba.

Human settlement in this part of Manitoba can be traced to at least the 8th century AD. Research at Calf Mountain, a mound builder site, indicated its use as a burial site from the 8th to the 15th century. Numerous indigenous peoples have left their mark on the area. 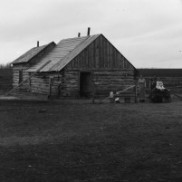 Please recognize the attitudes expressed in these bulletins may not reflect current attitudes.

Research was carried by Chris Vickers on Mound Builder and Assiniboine sites in Southern Manitoba from 1940 to 1950.

This report was prepared for the Historical and Scientific Society of Manitoba and is currently in the collection of the University of Manitoba.

Fond: University of Manitoba
» See all

Please recognize the attitudes expressed in these bulletins may not reflect current attitudes.

This deeply disturbing report describes the health concerns which Bryce noted in his investigation of conditions in the Indian Residential Schools in 1907.

The autobiography of Doris Pratt.

A historical memoir of the Gosselins, one of Manitoba's Métis families. The family lived in the Red River district, in the Rock Lake district before disbursing throughout Manitoba and Saskatchewan.

McGill's biography of the artist who was most well known for his pastel portraits of those First Nation leaders who signed the western treaties.

Edmund Morris was best known for his pastel portraits of the First Nation leaders who signed the western treaties.

Articles and photos taken during McClung's visit to the Elkhorn Industrial School in Elkhorn, Manitoba. These are found in Nellie McClung's scrap books which are held in the MS0010 Nellie McClung Fond of the Royal British Columbia Archive.